We value your privacy. We use cookies and other technologies to keep the site reliable and secure, tailor your experience, measure site performance and present relevant offers and advertisements, as described in our Privacy Policy, updated on December 31, 2019. Got it! 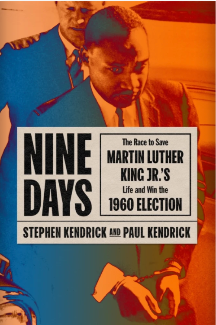 Welcome back, Indivisible Evanston Book Group! Thank you to everyone who attended our last discussion of We Were Eight Years In Power: An American Tragedy, by Ta-Nehisi Coates last August. And thank you to all of you for working so hard to help us turn the White House, House and now Senate blue!

We are excited to kick off our 2021 book club with our first selection, "Nine Days: The Race to Save Martin Luther King Jr.'s Life and Win the 1960 Election" by Stephen Kendrick and Paul Kendrick. We know Paul as the Executive Director of Rust Belt Rising, our parter in the WI and MI Voter Registration Project. When not phone or text banking to register voters, Paul was busy collaborating on this incredible book with his co-author and father, Stephen. We look forward to having both of them join us in discussion on March 3rd!

Next Book and Meeting Information

Nine Days: The Race to Save Martin Luther King Jr.'s Life and Win the 1960 Election

Co-authors Paul and Stephen Kendrick will join our discussion, which will be moderated by IE Co-Leader Laura Tanner on Zoom. The link will be sent out a few days before to all attendees.

The authors of Douglass and Lincoln present fully for the first time the story of Martin Luther King, Jr.'s imprisonment in the days leading up to the 1960 presidential election and the efforts of three of John F. Kennedy's civil rights staffers who went rogue to free him--a move that changed the face of the Democratic Party and propelled Kennedy to the White House.

Less than three weeks before the 1960 presidential election, thirty-one-year-old Martin Luther King, Jr. was arrested at a sit-in at Rich's Department Store in Atlanta. That day would lead to the first night King had ever spent in jail--and the time that King's family most feared for his life.

An earlier, minor traffic ticket served as a pretext for keeping King locked up, and later for a harrowing nighttime transfer to Reidsville, the notorious Georgia state prison where Black inmates worked on chain gangs overseen by violent white guards. While King's imprisonment was decried as a moral scandal in some quarters and celebrated in others, for the two presidential candidates--John F. Kennedy and Richard Nixon--it was the ultimate October surprise: an emerging and controversial civil rights leader was languishing behind bars, and the two campaigns raced to decide whether, and how, to respond.

Stephen and Paul Kendrick's Nine Days tells the incredible story of what happened next. In 1960, the Civil Rights Movement was growing increasingly inventive and energized while white politicians favored the corrosive tactics of silence and stalling--but an audacious team in the Kennedy campaign's Civil Rights Section (CRS) decided to act. In an election when Black voters seemed poised to split their votes between the candidates, the CRS convinced Kennedy to agitate for King's release, sometimes even going behind his back in their quest to secure his freedom. Over the course of nine extraordinary October days, the leaders of the CRS--pioneering Black journalist Louis Martin, future Pennsylvania senator Harris Wofford, and Sargent Shriver, the founder of the Peace Corps--worked to tilt a tight election in Kennedy's favor and bring about a revolution in party affiliation whose consequences are still integral to the practice of politics today.

Based on fresh interviews, newspaper accounts, and extensive archival research, Nine Days is the first full recounting of an event that changed the course of one of the closest elections in American history. Much more than a political thriller, it is also the story of the first time King refused bail and came to terms with the dangerous course of his mission to change a nation. At once a story of electoral machinations, moral courage, and, ultimately, the triumph of a future president's better angels, Nine Days is a gripping tale with important lessons for our own time.

NYT Review: No brief review can do full justice to the Kendricks’ masterly and often riveting account of King’s ordeal and the 1960 “October Surprise” that may have altered the course of modern American political history. Suffice it to say that any reader who navigates the many twists and turns and surprises in this complex tale will come away recognizing the power of historical contingency. -- New York Times

Paul Kendrick is a writer whose work has appeared in The New York Times, The Washington Post, USA Today, American Heritage, Talking Points Memo, and Huffington Post. Together, they are the coauthors of Douglass and Lincoln: How a Revolutionary Black Leader and a Reluctant Liberator Struggled to End Slavery and Save the Union and Sarah's Long Walk: The Free Blacks of Boston and How Their Struggle for Equality Changed America. Paul is also Executive Director of Rust Belt Rising and a member of the Indivisible Chicago Alliance.

Stephen Kendrick is the author of Holy Clues: The Gospel According to Sherlock Holmes and Night Watch (a novel). His work has appeared in The New York Times, The Washington Post, The Boston Globe, The Hartford Current, American Heritage, Huffington Post, and Utne Reader.

Please order your book online through Bookshop to support our local host bookstore Page 1 Books on Evanston's Central Street. Click HERE to order and it will be shipped directly to you or you can purchase it as an e-book. Page 1 will have some copies in the shop -- please contact them to reserve and pick up your copy there. You can also support Page 1 by ordering the audio version from Libro.fm. Or check out the book or e-book from Evanston Public Library.

Thanks for being part of the IE Book Group and we look forward to our next discussion!